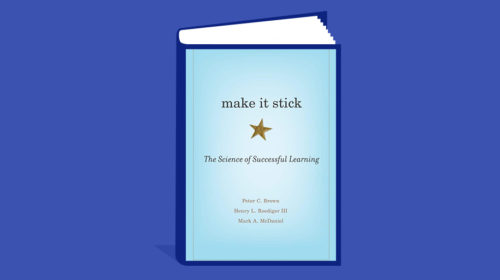 Why we love it: So much conventional wisdom about how we should study is wrong. Two world-class cognitive psychologists and a novelist team up to explain what’s truly effective.

From pages 19-20:
One of the most striking research findings is the power of active retrieval—testing—to strengthen memory, and that the more effortful the retrieval, the stronger the benefit. Think flight simulator versus PowerPoint lecture. Think quiz versus rereading. The act of retrieving learning from memory has two profound benefits. One, it tells you what you know and don’t know, and therefore where to focus further study to improve the areas where you’re weak. Two, recalling what you have learned causes your brain to reconsolidate the memory, which strengthens its connections to what you already know and makes it easier for you to recall in the future. In effect, retrieval—testing—interrupts forgetting. Consider an eighth grade science class. For the class in question, at a middle school in Columbia, Illinois, researchers arranged for part of the material covered during the course to be the subject of low-stakes quizzing (with feedback) at three points in the semester. Another part of the material was never quizzed but was studied three times in review. In a test a month later, which material was better recalled? The students averaged A- on the material that was quizzed and C+ on the material that was not quizzed but reviewed.