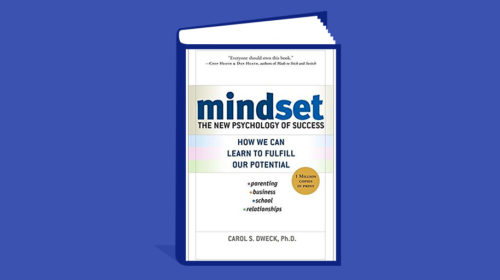 Why we love it: A beautifully crafted narrative, told in the first person, of the life work of psychologist Carol Dweck. Carol shows how success in school, work, sports, the arts, and any other domain depends on how you think about your own abilities.

What on earth would make someone a nonlearner? Everyone is born with an intense drive to learn. Infants stretch their skills daily. Not just ordinary skills, but the most difficult tasks of a lifetime, like learning to walk and talk. They never decide it’s too hard or not worth the effort. Babies don’t worry about making mistakes or humiliating themselves. They walk, they fall, they get up. They just barge forward.

What could put an end to this exuberant learning? The fixed mindset. As soon as children become able to evaluate themselves, some of them become afraid of challenges. They become afraid of not being smart. I have studied thousands of people from preschoolers on, and it is breathtaking how many reject an opportunity to learn.

We offered four-years-olds a choice: They could redo an easy jigsaw puzzle or they could try a harder one. Even at this tender age, children with the fixed mindset—the ones who believe in fixed traits—stuck with the safe one. Kids who are born smart ‘don’t do mistakes’ they told us.

Children with the growth mindset—the ones who believed you could get smarter—thought it was a strange choice. Why are you asking me this, lady? Why would anyone want to keep doing the same puzzle over and over? They chose one hard one after another. ‘I’m dying to figure them out!’ exclaimed one little girl.