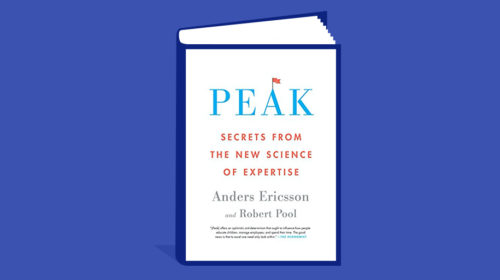 Why we love it: Anders Ericsson, the world expert on world experts, dispels myths about talent and distills three decades of research on high achievers.

From pages 4-5:
On the first day that Steve showed up for the memory work, his performance was dead on average. He could usually remember seven digits and sometimes eight, but no more. It was the same sort of performance you would expect from any random person picked off the street.

On Tuesday, Wednesday, and Thursday he was a little better—an average of just under nine digits—but still no better than normal. Steve said he thought that the main difference from the first day was that he knew what to expect from the memory test and thus was more comfortable. It was at the end of that Thursday’s session that Steve explained to me why he thought he was unlikely to get any better.

Then on Friday something happened that would change everything.

Steve found a way to break through. The training sessions went like this: I would start with a random five-digit string, and if Steve got it right (which he always did), I would go to six digits. If he got that right, we’d go to seven digits, and so on, increasing the length of the string by one each time he got it right. If he got it wrong, I would drop the length of the string by two and go again. In this way Steve was constantly challenged, but not too much. He was given strings of digits that were right at the boundary between what he could and couldn’t do. […]

That was the beginning of what was to be the most surprising two years of my career.

From this point on, Steve slowly but steadily improved his ability to remember strings of digits. By the sixtieth session he was able to consistently remember twenty digits—far more than Bill and I had imagined he ever could. After a little more than one hundred sessions, he was up to forty, which was more than anyone, even professional mnemonists, had ever achieved, and still he kept going. He worked with me for more than two hundred training sessions, and by the end he had reached eight-two digits—eighty-two! If you think about that for a moment, you’ll realize just how incredible this memory.