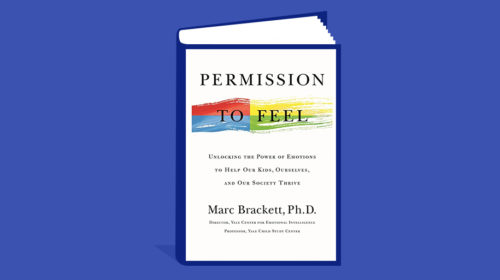 Why we love it: A compelling and complete journey that delivers on its promise to give us permission to feel. Marc Brackett shows us that emotional intelligence is not a gift but a skill—one that we can all learn, and benefit from immensely.

Feelings are a form of information. They’re like news reports from inside our psyches, sending messages about what’s going on inside the unique person that is each of us in response to whatever internal or external events we’re experiencing. We need to access that information, and then figure out what it’s telling us. That way we can make the most informed decisions.

That’s a major challenge. It’s not as though every emotion comes with a label telling us precisely what prompted it, and why, and what can be done to resolve it. Our thinking and behavior absolutely change in response to what we’re feeling. But we don’t always know why or how best to address our emotions. For parents, this might be a familiar scenario: we see a child who’s clearly suffering, and the reason isn’t apparent. Ask simply, “What’s wrong?” and the answer will almost never reveal the source of the anguish. Maybe the child doesn’t even know what’s wrong.

Here’s an example: Anger can sometimes seem unprovoked or inexplicable, but in almost every case, it’s a response to what we perceive as unfair treatment. We’ve suffered an injustice of some kind, big or small, and it makes us mad. Someone cut in front of you in line—and you’re furious. You were up for a promotion at work, but it went to the boss’s niece—and you’re outraged. Or it can be a mild form of the emotion—we’re peeved or mildly annoyed over something minor. But it’s the same basic dynamic at work.

Most of us don’t enjoy dealing with anger, whether it’s our own or someone else’s. When faced with what might appear to be an angry child, often the first impulse of a parent or teacher is to threaten discipline—if you don’t stop yelling, or speaking rudely, or stamping your feet, you’ll go sit in the corner, or I’ll send you to your room, or you’ll lose your privileges!

When it’s an adult who’s angry, our response isn’t much different. We immediately pull back. We stop listening sympathetically. We feel under attack, which makes it nearly impossible for us to deal with the information the person is conveying. But that anger was an important message. If we can try to mollify the injustice that sparked it, the anger will go away, because it’s outlived its usefulness. If not, it will fester, even if it seems to subside.

Thankfully, there’s a science to understanding emotion. It’s not just a matter of intuition, opinion, or gut instinct. We are not born with an innate talent for recognizing what we or anyone else is feeling and why. We all have to learn it. I had to learn it.