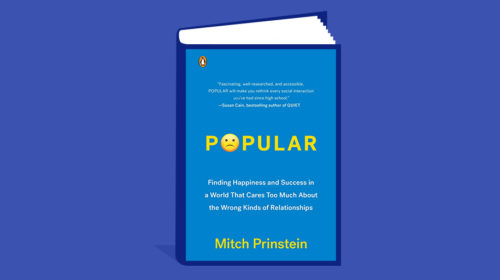 Why we love it: Were you popular as a kid? You no doubt have an answer to that, but Mitch Prinstein wants you to have two: Status is one thing, and likeability quite another. The origins of both types of popularity are the topic of this singularly fascinating, extraordinarily well-written book.

From pages 85-86:
How about those kids with whom we grew up who were “most popular”? They didn’t all end up becoming sports heroes or celebrities, or in high political positions. How did they turn out? Recent scientific data has addressed this question as well. Joe Allen and his colleagues at the University of Virginia sought to track down the “cool” kids from one of their high school samples to see whether having elevated status led to long-term benefits or problems. Allen’s study had begun with a group of youth who were just about to enter high school. They were thirteen years old—pubescent, naive, and in the throes of the usual adolescent awkwardness. Some had high status, but most did not. Using a variety of measures, Allen determined which were most popular and also which seemed to care most about having high status.

As anyone who has attended high school might expect, these high-status adolescents were among the first in their grade to get involved romantically with others; the first to show signs of minor deviancy, like shoplifting or sneaking into a movie without paying; and the most likely to have physically attractive friends. These are the qualities that many adolescents consider to be “cool,” and sure enough, it was these kids who were named as “most popular” by their schoolmates. Allen and his colleagues labeled this group the “pseudo-mature” teens.

Ten years later, Allen and his team tracked down all the participants in the initial study to see how the pseudo-mature teens had matured compared to their peers. By now the subjects were in their twenties and dispersed far from their hometown of Charlottesville. Allen’s lab flew around the country to meet with each participant, interview his or her friends and romantic partners, collect public records concerning them, and even gain permission to follow each participant’s social media profiles as another source of data. The result was one of the most comprehensive studies ever to examine relationship development from early adolescence to young adulthood.

What they discovered was that the pseudo-mature participants who seemed to have it all at thirteen were no longer doing as well. In fact, they seemed to be experiencing many more difficulties than their formerly low-status peers.