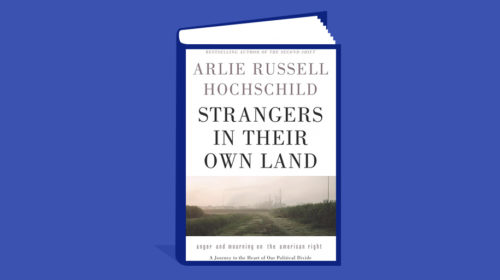 Recommended by: Jason Baehr, a philosophy professor at Loyola Marymount University and author of The Inquiring Mind: On Intellectual Virtues and Virtue Epistemology.

Why Jason loves it: A UC Berkeley sociologist who spent five years interviewing and conducting focus groups with conservative voters in the American South, Arlie Russell Hochschild makes the case that the recent polarization in the U.S. is partly a function of citizens across the political spectrum feeling profoundly misunderstood and misrepresented by the political opposition. She argues that the situation is unlikely to improve unless we’re willing to adopt a posture of curiosity—rather than dismissiveness or contempt—toward who our fellow citizens are and how they’ve come to view the world as they do. Her book shows that humility isn’t just an intellectual virtue; it’s an important civic virtue as well.

Excerpt:
From across the table at a meeting of the Republican Women of Southwest Louisiana, Madonna Massey, a gospel singer, declared that she “loved Rush Limbaugh.” In the past, I’d found Limbaugh harshly opinionated, and, incurious and offended, I’d routinely switched the dial. But not I told Madonna, “I’d love to talk about what you love about him.” When we sat down a week later to sweet teas at a local Starbucks, I asked Madonna what she loved about Limbaugh. “His criticism of ‘femi-nazis,’ you know, feminists, women who want to be equal to men. I absorbed that for a moment. Then she asked what I thought, and after I answered, she remarked, “But you’re nice….” From there, we went through Limbaugh’s epithets (“commie libs,” “environmental wackos”). Finally, we came to Madonna’s basic feeling that Limbaugh was defending her against insults she felt liberal were lobbing at her. “Oh, liberals think that Bible-believing Southerners are ignorant, backward, rednecks, losers. They think we’re racist, sexist, homophobic and maybe fat.” Her grandfather had struggled as a desperately poor Arkansas sharecropper. She was a gifted singer, beloved by a large congregation, a graduate of a two-year Bible college, and a caring mother of two. In this moment, I began to recognize the power of blue-state catcalls taunting red state residents. Limbaugh was a firewall against liberal insults thrown at her and her ancestors, she felt. Was the right-wing media making them up to stoke hatred, I wondered, or were there enough blue-state insults to go around? The next time I saw Madonna, she was interested to know if it had been hard for me to hear what she’d said. I told her it wasn’t. “I do that too sometimes,” she said, “try to get myself out of the way to see what another person feels.”