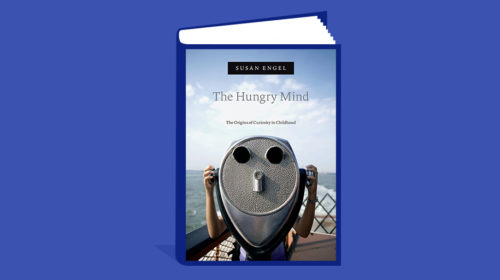 Why we love it: Developmental psychologist Susan Engel explains how curiosity develops and what parents and teachers can do to foster it more intentionally.

From pages 107-108:
When I was seven years old I switched from the one-room schoolhouse in my farm village to a brand-new progressive independent school. It was there, on the second day of its existence, that I had my first formal science class. Along with all the other students who were ages six to eleven, I was brought to a long table, where we each took a seat. About six identical square white objects sat in a line, running down the middle of the table. The science teacher, Tony, asked us what those objects were. We looked at him expectantly. Most if us already knew that when a teacher asked a question, he or she undoubtedly knew the answer already. But he said nothing. So we looked again and, seeing almost instantly what the objects were, called out easily, “They’re sugar cubes!” He then said, “How can you be sure?” At first we were baffled. He knew what they were. We were sure we knew what they were. But his question hung in the air, and since he refused to proceed, we had to figure out whether we were right. Maybe we were wrong. So we began to examine the cubes. Children picked them up, bringing them close to their faces so that they could inspect them. Several children sniffed the cubes, and a few turned them around to make sure they really did look the same on all sides. One little boy shook it next to his ear. Finally, I did the only sensible thing. I stuck my tongue out and tasted it. I was taking a risk. What if it wasn’t what I thought it was? But that nice familiar zing of sweet greeted my tongue. Tony then said, “Yes, that’s what scientists do. They observe. And you have five senses with which you can observe.” I never, ever forgot that lesson.” Why didn’t I? It’s not because it was more fun than other activities. I did lots of fun things in school. And it’s not because it was harder than other lessons. There was nothing hard about it. The reason was actually quite simple. I was taken in by the mystery. I wanted to know what would happen next. The idea that you learn something better when you’re curious about it seems so straightforward as to be obvious, almost banal. However…, Most of the time children are expected to learn things  for one of three reasons: they are afraid of what will happen when they don’t learn it; they want the reward they will get if they do learn it; or they are convinced that learning it is essential to their future well-being (a sort of long-term hypothetical reward).