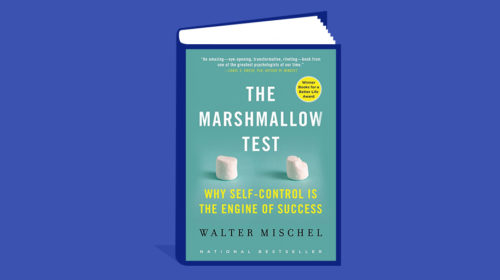 Why we love it: Walter Mischel was a pioneer in the science of self-control. Among his foremost achievements is the invention of the Marshmallow Test, which crystallizes the internal tug of war between immediate and delayed gratification. Synthesizing a lifetime of research, Mischel explains how strategies anyone can learn improves self-control—and helps you achieve more in school, at work, and in life.

From pages 18-19:
Inez was eager to get two cookies rather than just one when given the choice. She understood that Monica had to go out of the room to do some work but that she could call her back at any time by ringing the bell. Monica let Inez try ringing it a couple of times, to demonstrate that each time she rang Monica would immediately come back in the room. Monica then explained the contingency. If Inez waited for her to come back by herself, she got the two cookies. If she did not want to wait, she could ring the bell at any time. But if she rang the bell, or began to eat the treat, or left the chair, she’d get only the single cookie. To be sure that Inez understood the instructions fully, she was asked to repeat them.

When Monica exited, Inez suffered for an agonizing few moments with an increasingly sad face and visible discomfort until she seemed about to burst into tears. She then peeked down at the treats and stared hard at them for more than ten seconds, deep in thought. Suddenly her arm shot out toward the bell but just as her hand got to it, she stopped herself abruptly. Gingerly, tentatively, her index finger hovered above the bell’s ringer, almost but not quite touching it, over and over, as if to tease herself. But then she jerked her head away from the tray and the bell, and burst out laughing, as if she had done something terribly funny, sticking her first into her mouth to prevent herself from roaring aloud, her face beaming with a self-congratulatory smile. No audience has watched this videos without oohing and laughing along with Inez in empathic delight. As soon as she stopped giggling, she repeated her teasing play with the bell, but now she alternately used her index finger to shush herself and stuck her hand in front of her carefully closed lips, whispering “no, no” as if to stop herself from doing what she had been about to do. After 20 minutes had passed, Monica returned “by herself” but instead of eating the treats right away, Inez marched off triumphantly with her two cookies in a bag because she wanted to take them home to show her mother what she had managed to do.