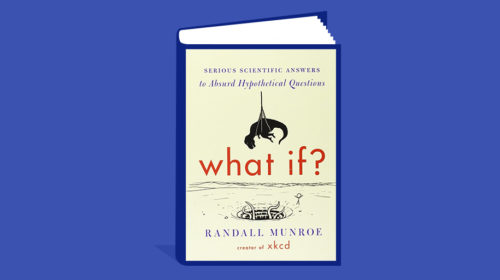 Why we love it: Randall Munroe loves questions, no matter how bizarre or unlikely. This book celebrates wanting to know more about things even when answering seems impossible. Even though the math and science used in his responses might be beyond the grasp of some readers, everyone will learn to value asking about what’s outside the box.

Example Questions:
What would happen if you made a periodic table out of cube-shaped blocks, where each brick was made of the corresponding element?

If every person on Earth aimed a laser pointer at the Moon at the same time, would it change color?

What would happen if everyone on Earth stood a close to each other as they could and jumped, everyone landing on the ground at the same instant?

If an asteroid was very small, but supermassive, could you live on it like the Little Prince?

Which U.S. state is actually flown over most?