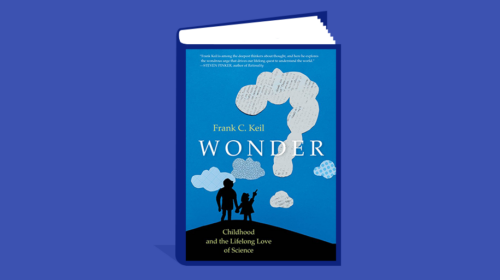 Why we love it: Summarizing recent scientific discoveries, many from his own lab, Frank Keil demolishes a deficit view of young learners and replaces it with a portrait of the child as a curious investigator, fully capable of asking and exploring an endless sequence of questions about how and why the world works. A must-read for any parent or educator who believes a young mind is a terrible thing to waste.

From pages 73-74:
If you ask a professional magician to perform at your three-year-old’s birthday party, she may either politely decline or substitute a child-oriented act that contains very little “magic.” Adults’ sleight-of-hand tricks and other misdirections often fail to impress young children who are not as susceptible to quirks of mature attentional systems. Indeed, many child-centered magic shows often succeed primarily because of goofy costumes and cute animals. My son Marty remembers his first exposure to magic as not really being very magical at all. It came in the form of packaged kits, special cards, and corny tricks, all of which were plainly not magic but instead were contrived forms of deception. The deceptions rarely worked on friends but did result in highly amusing performances.

But if you do want to perform real magic tricks, pretend to violate core physics by having a real ball seem to disappear or pass through a solid. Young children will indeed be surprised. What happens next, however, is less studied but more important: when the show is over and if the props are left on the table, many young children will immediately try to look inside or behind the magic box to figure out what was inside that made the magic work. They are, in short, searching for a mechanism to explain away the mystery.