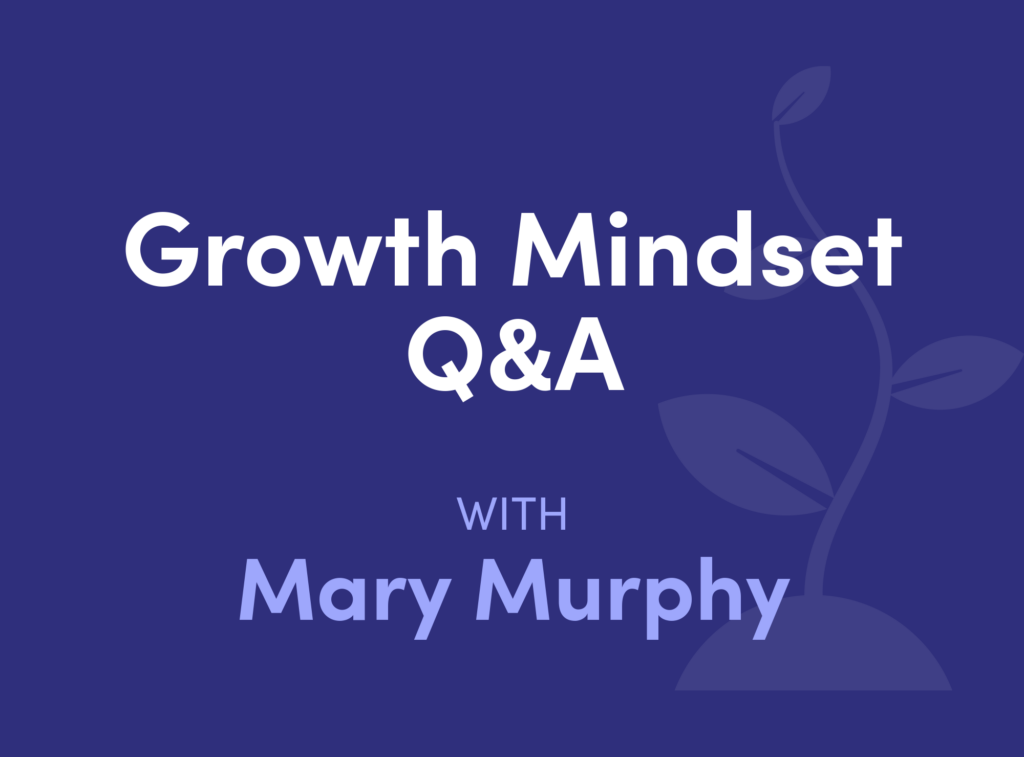 Mary Murphy, the Herman B. Wells Endowed Professor of Psychological and Brain Sciences and the founder of the Equity Accelerator at Indiana University, talked to us about how to help young people foster a growth mindset. Here are a few highlights:

Lots of people have heard the term “growth mindset.” What is it, and why is it so important?

Growth mindset is the belief that intelligence and other abilities are malleable and that we can improve them—through effort, seeking help, and trying new strategies. That’s distinguished from a fixed mindset, believing that you either have it or you don’t, that you’re a math person or an artsy person—or you’re not.

Where have you seen fixed and growth mindsets in your life? What have you learned from that?

When I started graduate school, I noticed the professors were really different. In one seminar, they focused on tearing down students’ presentations and ideas. Who was the smartest in the room? How could they find the fatal flaw, and who could find that the quickest?

The students were really influenced by this fixed-mindset idea, what I call a Culture of Genius. They wouldn’t be able to remember core aspects of their work or answer questions. They basically choked.

And then there were other seminars where the faculty were still tough on students, but it was more from a culture of we’re going to help you learn how to make this presentation better. We’re going to identify the flaws and the mistakes so that we can improve it.

Students responded differently in this Culture of Growth, and they were motivated at the end of their presentations to go and make them better.

Is that what led you to study mindsets and cultural environments?

Yes. Also, I am Latina, and as a bicultural person, I’ve felt that different settings can call forth different parts of our identities. We can really feel our gender or racial or ethnic identity in some contexts, compared with others, because it seems more important.

We might be the only one of our kind in a place, so we feel as though we stand out more. And we don’t feel it as much in other contexts, like when we’re at home with our families, where we all belong to the same groups. Context influences our thoughts, our emotions, our motivation, our performance, and even the way that we interact with people.

What’s the most important thing parents and teachers should know about growth mindset?

The way we even subtly react to a kid’s mistakes and their performance can send messages beyond what we say.

There was a really beautiful study done by Kyla Haimovitz and Carol Dweck in which parents brought their kids into a research lab, reported their own mindset beliefs, and then their kids were asked to try to solve unsolvable problems. And parents either helped them problem solve and shift strategies—“Try something new.” “Have you thought about this?” Or they just winced every time kids made a mistake. They made this “ick” face and were like, “Nope, that wasn’t it. Try again.”

What predicted kids’ responses were these more subtle behaviors and how they interacted with their kids as they were struggling—the winces, the anxiety that parents showed as children were struggling—not what parents believed in their heads.

How do we counteract these winces, then? What can we do instead?

Show examples of people who have done really well but for whom success didn’t come easily or quickly—the kinds of mistakes that they made, the teachers and mentors and family members who helped support them. It communicates the belief that struggle and mistakes are just normal opportunities for learning.

Also, I love the practice of My Favorite Mistake. At the dinner table, rather than say, “What did you do today?” ask “What was your favorite mistake today?” In the classroom, teachers can put their favorite mistake on the board when they hand back homework: “This was my favorite mistake that I saw people make.” That shifts the conversation so that making mistakes isn’t shameful. You celebrate them, learn from them, and talk about how to approach the problem the next time.

What are some myths about growth mindset we should be careful of?

One myth is what psychologists call a false growth mindset, which is misinterpreting it to be about sheer effort—that if you just try hard enough, you’re bound to improve. But if you do the same thing the same way a million times and don’t get better, you’ll think, maybe this isn’t for me.

A true growth mindset recognizes that there are many ways you can improve and develop. You can ask for help. You can try a different tactic. You can take a break and come back to it.

This is problematic because it suggests that you either have one or the other when, in fact, mindset is a continuum. We all have the fixed and growth mindsets within us. And there are different situations that bring out each of them.

When we create Cultures of Growth, we create norms in which we celebrate other people’s successes and learn from what they did so that we can be successful in our own right.

There are so many stereotypes about intelligence and ability, who has it and who doesn’t. There are many fewer about who can improve and develop.