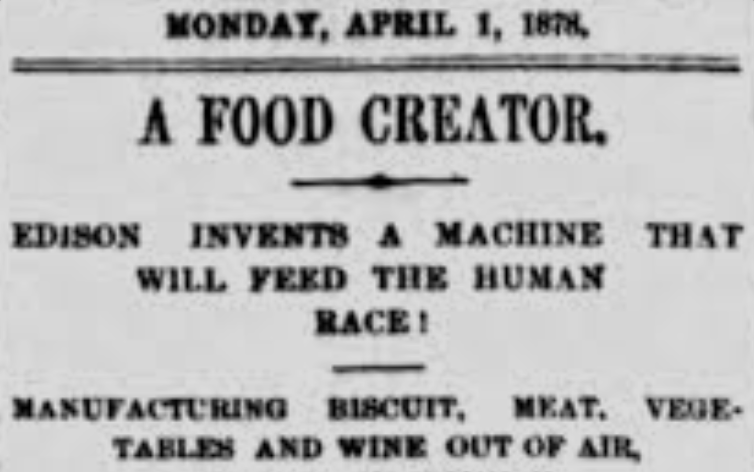 Exactly 140 years ago today, The New York Graphic ran a story about Thomas Edison with this headline: “Edison Invents a Machine That Will Feed the Human Race.”

Did he? Did Thomas Edison invent such a device?

After all, Thomas Edison is arguably the most prolific inventor in history. He invented the phonograph, the first reliable electric light bulb, the first practical storage battery, and the first operable electrical plant. Without Edison, we wouldn’t have motion pictures: It was Edison who figured out how to present photographs in quick succession by perforating specially designed celluloid film and moving the images with sprockets behind a shutter. And he had a thousand more inventions—with the patents to prove it.

Edison is celebrated for his grit. “The trouble with other inventors,” he once observed, “is that they try a few things and quit. I never quit until I get what I want.” But Edison was also a paragon of curiosity.

It is easy to forget that curiosity is part of character. Curiosity—wanting to learn—is as elemental to a fulfilling life as any other character strength.

And yet look at this graph.

Then consider the fact that curiosity has almost no relationship with report card grades when controlling for other character strengths. Edison once recollected, “I was always at the foot of the class. I used to feel that teachers did not sympathize with me.” Fortunately, he found encouragement in other quarters, particularly in his mother. She pulled him out of school and taught him herself, ceded him the cellar so he could create a makeshift laboratory, and to his father defended Edison’s nonstop experimentation (and the occasional explosion): “Let him be. He knows what he’s about.”

Many schools have mottos embracing hard work, but few honor the character strength of curiosity.

I think that’s a shame. Character is everything we do that is good for us and good for others. Curiosity makes the brain learn faster. And curiosity spurs finding solutions to other people’s problems. Long before design thinking became a paradigm, Edison said, “I figure out what the world needs. Then I go ahead and try to invent it.”

Did Edison invent a machine that could feed the human race? No, that 1878 headline was an April Fool’s joke.

But every major innovation started with a question. Improving the lot of the human race depends, crucially, on curiosity.