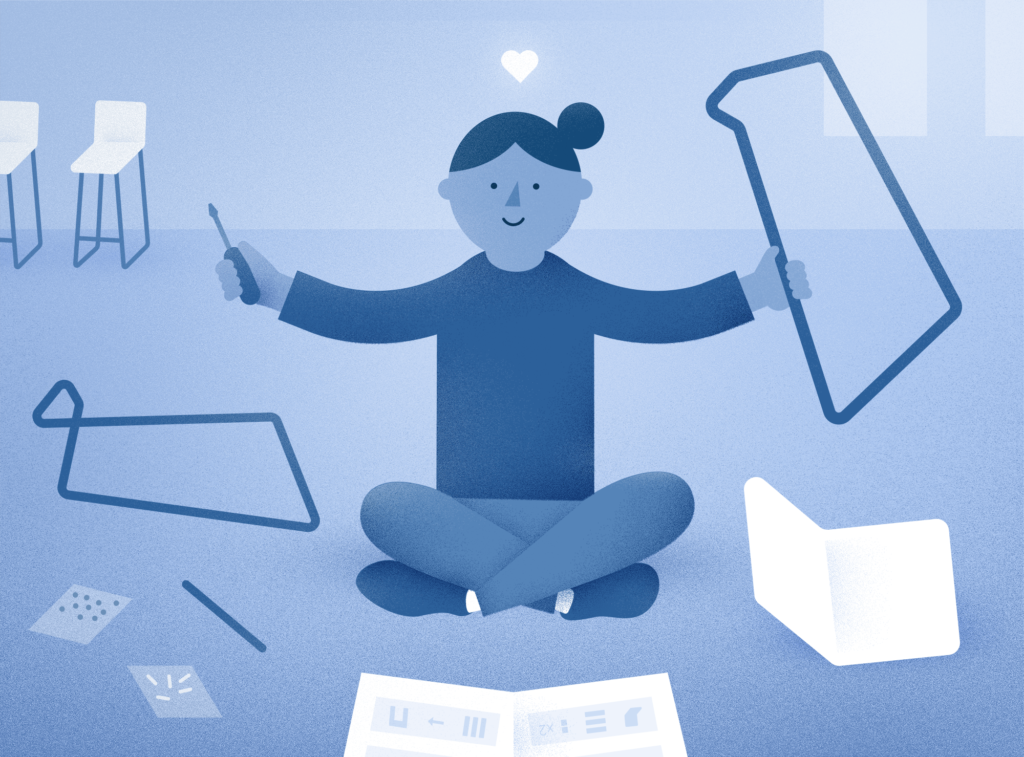 A funny thing happened while I was screwing in the legs to an IKEA counter stool I bought recently: I fell in love with it.

When my husband came home, I couldn’t wait to show him my handiwork. “Isn’t it gorgeous? Don’t you just love the lines?”

He glanced at the stool for a millisecond. “Oh sure. It’s fine.”

Psychologists have a name for the phenomenon I’d just experienced. Appropriately enough, it’s called the IKEA effect, and it refers to valuing an object more because you had a hand in its creation. For instance, in one lab experiment, participants randomly assigned to build an IKEA storage box were subsequently willing to pay a 63% premium to take it home compared to those given the chance to buy an identical preassembled box.

My guess is that if positions had been reversed, and my husband had been the one to pop the plastic floor guards into the legs and attach the white plastic seat, he’d be the one cooing over the stool like it was a newborn baby, while I’d be the one giving it a dismissive glance.

What makes the IKEA effect so fascinating is that in so many ways, human beings are programmed to avoid unnecessary effort. We are—all of us—inherently lazy. If we can buy something in one click, that’s better than two. If we can find a parking space six feet closer to the store entrance, we’ll take it. In this respect we’re no different from any animal trying to conserve energy in the name of survival.

But the IKEA effect reveals an important upside to effort. After all, is an ideal life one in which everything comes easy? Are our best days the ones when we did “nothing”?

This semester, I decided to use the IKEA effect as a teacher. At the beginning and end of each class, two teams of students share the mic. The opening team prepares a four-minute interactive activity that dovetails with that day’s lecture. The closing team interviews a guest speaker, introducing them to the class, asking the first questions, and moderating questions from the rest of the class.

It’s a lot of work. The teams meet several times in advance—brainstorming, researching, coming up with a game plan, and then rehearsing.

The result? One student remarked: “Especially in a virtual class environment, I think it helps students feel more engaged with the class and connected to one another.” Another said, “When I have to teach or use the material in a creative way, it helps me absorb the information better,” adding that “passing the mic to as many students as possible would naturally increase the psychological safety of everyone in the class, which might encourage more students to speak up in class who normally wouldn’t.”

Try sharing responsibility with the young people in your life. Ask not what more you can do for them, but what they can do for their family, their fellow students, and their community. Laziness is universal, but so is the capacity to labor—and to love the fruits of our labor.