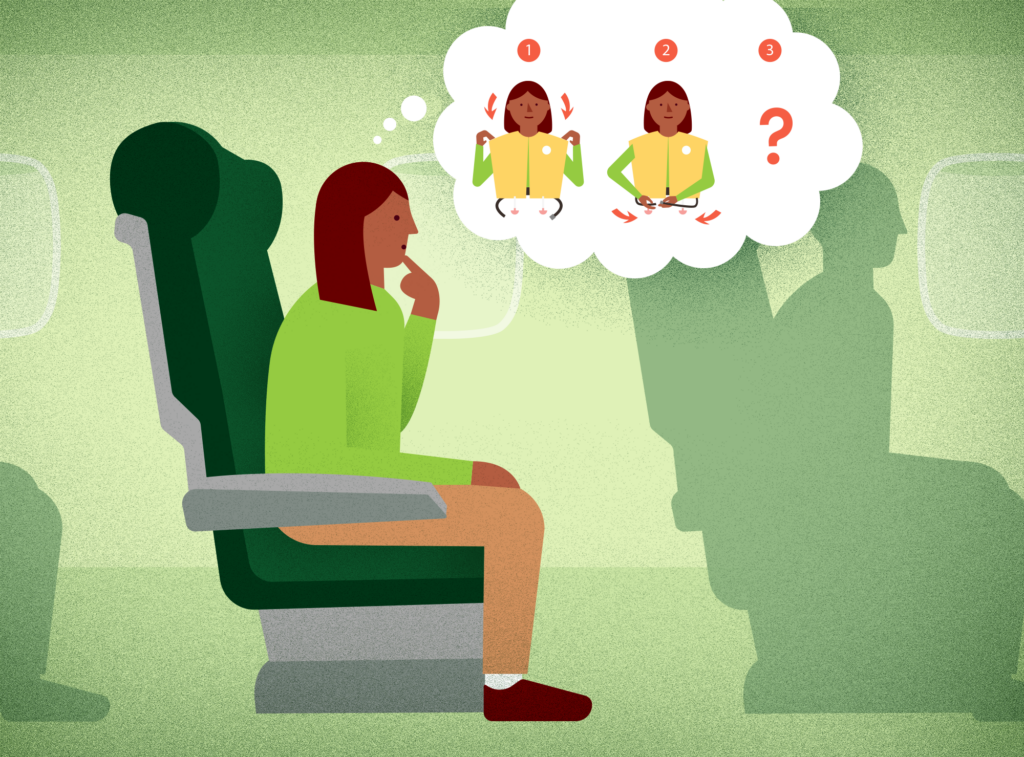 Today, I’ve asked Robert A. Bjork to share his Tip of the Week. This is the last in a four-part series on learning. You can read the first one here, the second here, and the third here.

Years ago, after watching a flight attendant demonstrate how to put on an inflatable life vest, I thought to myself, “Oh, man, how many times have I seen this demonstration—50 times? A hundred?”

Something made me wonder, though, “Do I really know how to do this?”

I closed my eyes and imagined the plane was down in the water, that some people were screaming and I could smell smoke. It seemed surprisingly real, and I started to feel panicky. Where was the vest? Under the seat, but was it just hanging there or in some kind of bag I had to open?

I imagined finding and unfolding the vest, then getting panicky again when I was unsure which side was the front. After getting the vest over my head and pulling on some straps to tighten it, I imagined inflating the vest. Only when I reached an exit row did I remember I was not supposed to inflate the vest until after getting through the exit window—and I imagined other panicky passengers trying to push me and my inflated vest through the window.

Research shows that watching someone else perform a skill isn’t the same as doing it yourself, just like rereading information doesn’t prepare you to actually recall information when it’s time to take a test.

The act of what scientists call retrieval practice—forcing yourself to recall previously learned material—is far more effective. When you test yourself and get things wrong, you’re not making a mistake. You are identifying what needs to be studied—or perhaps studied again.

That’s why, when giving a talk at the air traffic control center in Oklahoma City, I suggested that airports should have a room where passengers could practice putting on a life vest or oxygen mask. Doing the activity even once is worth more than dozens of passive observations of flight attendants’ demonstrations. After completing the exercise, you could get a little lapel pin saying, “Follow me! I know how to get out of the plane.”

Don’t think you can do something just because you’ve seen someone else do it. Watching a cooking show doesn’t make you a chef.

Do help young people recognize the benefits of retrieval practice. Students can create summaries as review sheets or get together with friends to quiz each other. As the old adage goes: “Tell me and I forget, teach me and I may remember, involve me and I learn.”

Robert A. Bjork is a distinguished research professor in the department of psychology at the University of California, Los Angeles.